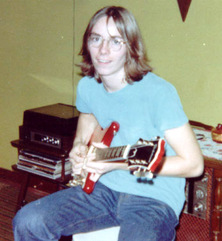 In 1973, my seventh grade teacher in Parkersburg, Illinois, frequently tuned the classroom TV to a fifteen-minute PBS show called Wordsmith. On that show, a man named Bob Smith unfolded words and their etymologies—from the ordinary to the arcane. Through this TV program, I learned that words were like packages to be opened, almost magically, to reveal surprises, layers, and peculiar histories. Even a word like dinosaur, such a potent word to a twelve-year-old boy interested in science as I was, had its Greek secrets--deinos and sauros meaning “terrifying lizard.” Thus I became an amateur (the root meaning “lover”) student of words.

In my teenage years, I played guitar in a rock band, wrote songs, and became a devoted student of every aspect of rock music culture. As an avid reader, I read all kinds of books and magazines on pop culture, science, art, and religion. I didn’t discover “literature” until my mid-twenties, and once again, PBS was involved. One evening I happened upon a program on the life and works of the American poet William Carlos Williams. The next day I went to the library and checked out three books of poetry. Within a year, I enrolled as an English major at Brigham Young University, where I had my first experiences as a fiction writer.

By this time, 1990, my wife and our two children were living in an apartment on the first floor of a large old house in the oldest part of Provo, Utah. That summer, I took a creative writing class and was assigned to write a short story, something I’d never done before. Somehow I got the germ of an idea, and I sat down at the computer and wrote a story called “A Sense of Order,” about an aged widower on the last morning of his life. I wrote the story in one sitting, finishing around 11:00 p.m. I printed it on our dot-matrix printer and went out the screen door and stood on the front porch for a moment to look out at the darkened lawn and the sidewalk and the streetlight on the corner. I marveled at what I’d just experienced. To have been in the mind of an imaginary character and, in a sense, to have “watched” the story unfold as I typed was an exhilarating creative experience. I subsequently revised that story many, many times, and now it's the title story of my book, A Sense of Order and Other Stories.

Perhaps my drive to keep writing, even when the writing gets difficult, is rooted in an experience I had as an eighteen-year-old playing guitar in the band back in Illinois. That summer our band rehearsed every day in an old church building in a town called Noble. The building’s owner had taken out the pews and had plans to make it a recording studio. For three months our band practiced eight hours a day, five days a week at “the church.”

I remember one particular afternoon when we were trying to get down the Led Zeppelin song “Nobody’s Fault But Mine,” off the album Presence. The song was six minutes long, with some very complicated rhythms, certainly the most difficult piece we’d ever tried to play. We’d already worked through it several times. We were getting tired of it, but we were also closer to having it perfect. We played it through once more, and this time, with only a couple of little mistakes an audience wouldn’t have noticed. After ending the song, we stood there a moment, just looking at each other. Someone finally said, “That was pretty good.” Someone else said, “Yeah, that was better.” Then Mike, our bass player, asked, “One more time?” I went to the microphone thinking, “One more time. That’s what it takes.” I remember feeling that drive, the understanding that nothing worthwhile comes easily. If we were going to be a good band, we had to be willing to do it just one more time.

The same goes for writing. One more time, one more revision. If you want it to be good, you have to be ready to go through it one more time.

This book is a published version of Harrell's University of Idaho PhD dissertation.